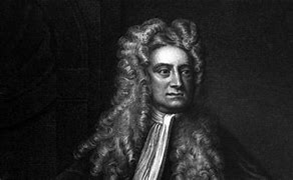 Sir Isaac Newton was born in 1643. He lived in the hamlet of Woolsthorpe just south of Grantham, Lincolnshire. Throughout his childhood, he found an escape in education. He worked hard to develop this passion and despite having faced many challenges. Newton’s only true focus was on his learning.

In June of 1661, the modern scientific revolution was well underway around the world, but not in Cambridge where Newton was studying. Isaac’s curiosity and passion drove him to improve on the wisdoms he was learning.

Due to circumstances, his Cambridge University had to close, but in this time, he was dreaming big and he started to write his notes on the splitting of white light with prisms. He even studied the movement of the moon. A process that would later develop in to his laws of motion and later still would be the foundation on which he developed the idea of what we now call gravity. In 1667, he returned on a fellowship to Cambridge and by 1669, he was a professor.

Throughout his life, Sir Isaac Newton shows that curiosity and passion can lead to the gaining of knowledge. Having the courage to search for answers not yet found leads to wisdom.

He once famously said: "My powers are ordinary. Only my application brings me success."