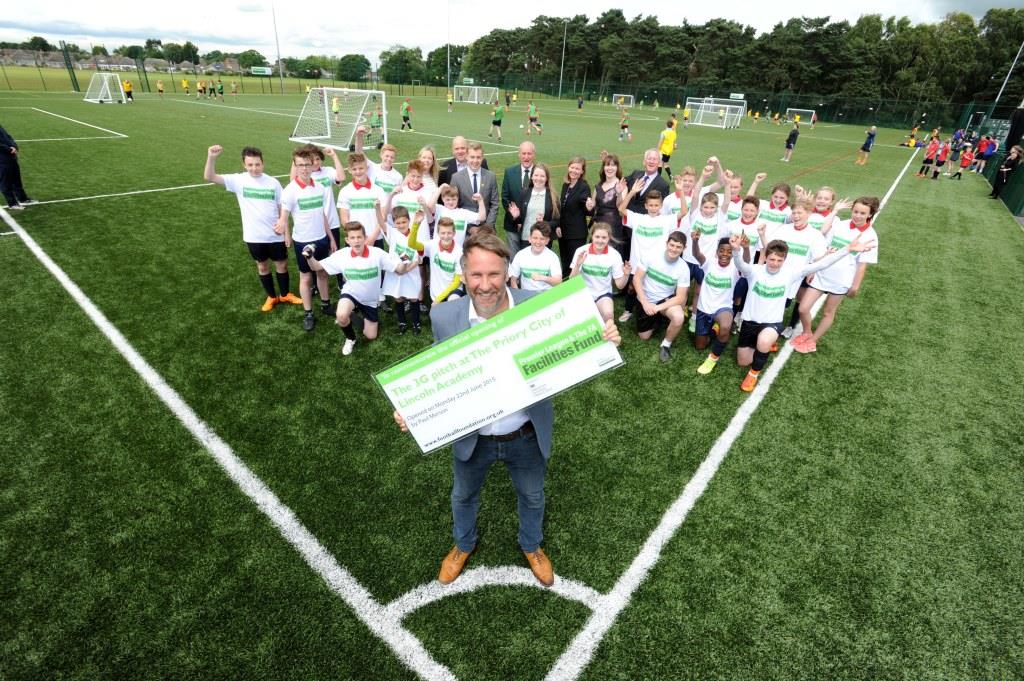 Paul, now a Sky Sports presenter and studio analyst, unveiled a plaque at the all-weather pitch which will be used by students, local grassroots teams and the community at large.

Paul also presented trophies at the end of two tournaments – a primary schools’ festival involving 15 local teams and then a House event featuring Years 7 to 10 at the Academy. In between the competitions, he took part in a Q&A session with students and VIP guests including governors, Lincolnshire FA and Lincoln MP Karl McCartney.

The floodlit facility was made possible thanks to a £250,000 grant awarded by the Premier League & The FA Facilities Fund – which is delivered by the Football Foundation – together with £300,000 from The Priory Federation of Academies Trust. The pitch will be available to students at the Academy as well as grassroots teams across the city including partner clubs Birchwood Colts, Hykeham Tigers, St Helens and Hykeham Town. 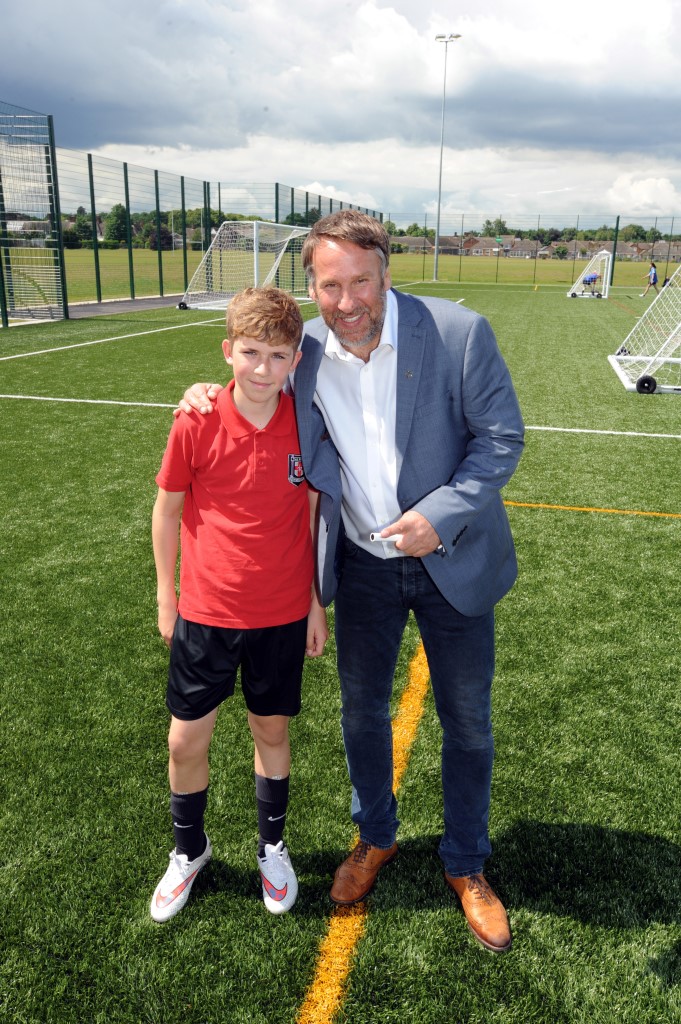 Paul told the students at the ceremony: “This is a lovely pitch – it’s so perfect it makes me want to pull my boots on again and have a game! You must make the most of it because I wish I had been able to play on something like this when I was growing up.

“We need more facilities like this in England if we are going to produce more players for all levels of the game. Credit has to go to the Premier League & The FA Facilities Fund, the Football Foundation and The Priory Federation of Academies Trust for making this happen.”

Year 12 student Holly Ella, a House Vice-Captain, said: “It was a fantastic day – Paul Merson was great fun and nothing was too much trouble for him. He got on so well and so easily with everybody he met.”

Deputy Head Boy Kyle Friest, who helped to unveil the plaque, said: “It was great to meet him. He was so easy-going and ready to have a laugh with anyone and join in a few kick-abouts. It was interesting to see all the teachers queuing up to have their photos taken with him as well.”

Mrs Hopkinson, Headteacher at the Academy, said: “We are delighted that Paul Merson was as impressed as the rest of the community with what is a wonderful new facility.

“He was brilliant with the students – he must have signed everything in sight and had countless selfies taken. It’s definitely been one of the highlights of the year.

“The 3G pitch itself will dramatically improve local access to grassroots sport and it simply wouldn’t have been possible without the grant from The Premier League & FA Facilities Fund.”

The Premier League & The FA Facilities Fund is funded by the Premier League, The FA, and the Government, via Sport England. It is delivered by the Football Foundation, the country’s largest sports charity. Since it was launched in 2000, the Foundation has awarded around 13,000 grants worth more than £530m towards improving grassroots sport, which it has used to attract additional partnership funding of over £740m – over £1.3bn of investment into the grassroots game. 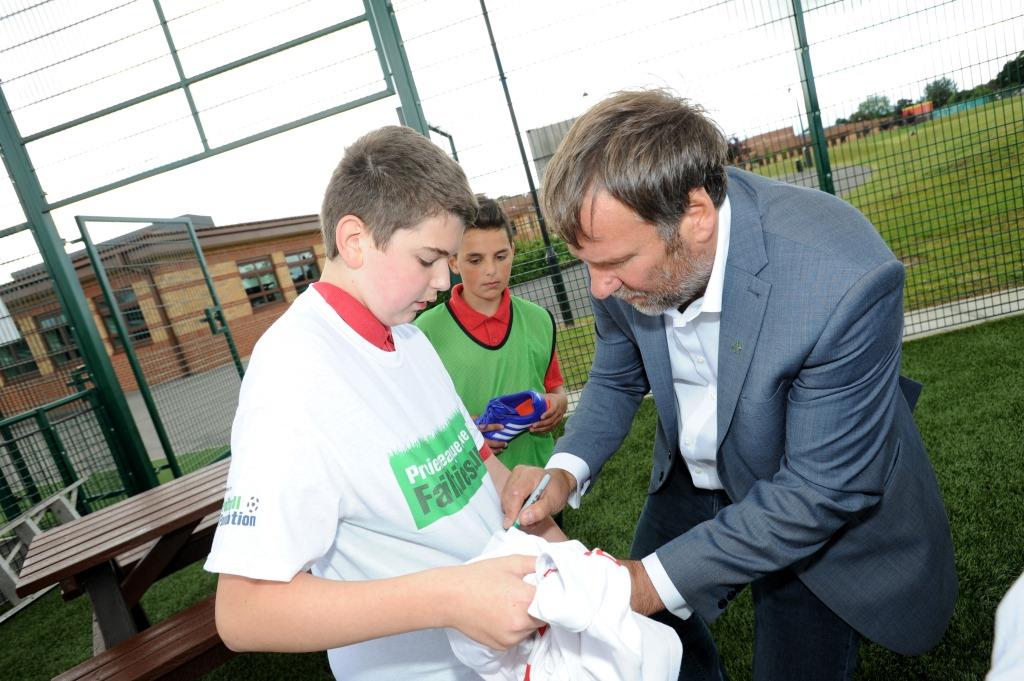 Since its inception in 2000, the Football Foundation Funding Partners’ investment has provided 211 grants worth £12m towards grassroots sports projects worth over £39m across the whole of Lincolnshire.

By providing more high-quality facilities, coupled with coaching at the appropriate age group, the Premier League & The FA Facilities Fund aims to improve the experience for regular players as well as attracting new players to the game.

Paul Thorogood, Chief Executive of the Football Foundation, said: “I am delighted that a grant from the Premier League & The FA Facilities Fund has enabled The Priory City of Lincoln Academy to complete this project. This development will provide a real boost to sport in the local area. A special thanks must go to Paul Merson for taking time out to open the new pitch.

“Since 2000, the Football Foundation has supported grassroots projects worth more than £1.24bn, investing into areas where the need is greatest and where it will have the biggest impact in terms of getting more people playing football and a wide range of other sports.

“With this funding, provided by the Premier League, The FA and the Government, through Sport England, we are helping to improve community sports facilities across the country and thereby the playing experience of those who take part. This latest project in Lincoln is the latest addition to the inventory of modern community sports sites we are developing that cater for the needs of local people who want to play sport purely for the love if it and to stay healthy.” 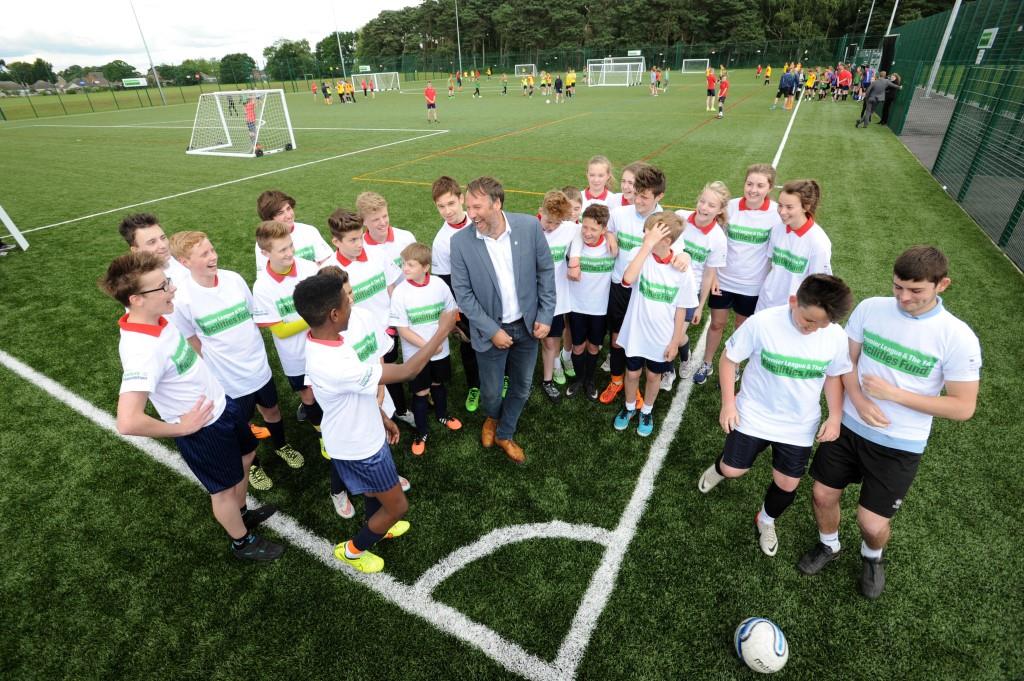